Posted on September 8, 2014 by nicdempsey

This year, along with the cocktail cherries, I made cherry brandy. It’s still steeping away but having made that I didn’t stop there. I’ve also had a go at raspberry and plum gins. Although there’s no actual hubble or bubble, it’s still seems like a witchy thing to do, leaving fruit to seep in alcohol and making something altogether different. 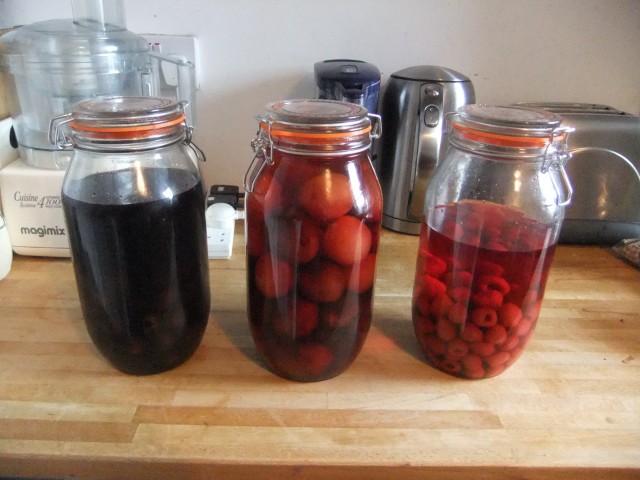 They are all pretty simple to make and will be ready for Christmas. My plan is to decant into miniature bottles and box up all three as a ‘set’  for Christmas presents. If you look up fruit gins on the web, you’ll see loads of recipes.

The general consensus for cherry brandy seemed to be a litre of alcohol, 1 kg of cherries and 300g of sugar. It’s steeping nicely and it’s good but if I had a criticism it’s that it’s a bit sweet. So I knew that with both of these I wanted to use less sugar. My original plan was to use gin for the raspberries and vodka for the plums. Although the consensus is to use cheap alcohol and I will confess that the brandy I used for the cherry was half Waitrose’s 3 Year Old stuff  and half Lairds Applejack (which is probably why it’s tasting a bit sweet). I know nothing about vodka and have no idea about what represents good value in cheap vodka, but the Bombay Dry Gin, which I quite like and is much better than the Bombay Saphire, was on special offer and cheaper than the same amount of Sainsburys Own Brand Vodka. I opted to use that for the plums. In retrospect, I feel I should have gone for my usual choice of ‘cheap’ gin – Beefeater, because I like it and the alcohol by volume is 40% not 37.5% as the Bombay is (I presume to keep the price down, as it used to be 40% abv).

I ended up using a litre of gin to a kilo of plums and 200g of sugar. I’m going to leave that for 3 months so I’ll strain and bottle it in November which will give it a while to mature before Christmas.

There is more riding on the raspberry gin, my friend Jonny makes really good raspberry gin from his allotment raspberries and the first year he made it, I tasted it, told him it was good but that he shouldn’t ever use Gordons for this ’cause of the ABV.  I was considering Tanqueray (also on special offer) or Beefeater for this  but decided to use the glut of Plymouth that I had in my cupboard (I bought a bottle on special offer a while ago, forgetting that I already had a bottle in the cupboard!) because it’s my trusty gin staple and everyone knows how much I love it! To make this I ended up using less sugar because the gin isn’t going to steep for very long. According to Jared Brown, no more than two weeks. So I’m going to decant when I get home from holiday.

I’ll update you on them as I decant them and if there’s time and I can pick them, there may be a small batch of blackberry gin too!