Housework for One: Clean and Tidy

I’ve been blogging since 2008 and in that time I’ve basically used the space as a massive journal. To log the things I’ve cooked, to set goals and keep me on track, to explain how and why I see the world, to track what’s going on in my head and my life.

One of the things that I’ve tracked on and off in that time, more off than on, are my attempts at housework.There was the housework spreadsheet, the weekly task lists to make sure that got everything done at the weekend. Earlier this year, I noticed that the allotment was changing how much time I had to make sure the house was tidy and tried to do an extra 30 minutes each evening during the week.

Basically, the routine changes depending on time, season and energy and over time housework has become easier to do and keep up with because I recognise how important it is to me. I’d like to be the kind of person who thrives in a messy environment but it’s just not the case. My life works better when the flat is tidy and that that only happens when I suck it up and do the work. The opposite is also true, you don’t have to do everything, I can let some things go sometimes, the need to hoover can be ignored but the washing up cannot.

I have key chores that have to be done every week which make the biggest difference to my quality of life and ability to live it.

I do at least four washes a week from Thursday to Sunday. Thursday night is work clothes, Friday is towels and cleaning clothes (that’s a 90 degree wash), Saturday/Sunday is for a white wash which is usually sheets and underwear and the final wash is all of the weekend clothes on Sunday night. The aim is to have an empty laundry basket on Sunday night.

I also have it all dried, ironed if required and put away by Tuesday because I don’t appreciate it cluttering up my bedroom.

I don’t like washing, it seems never ending but not having to scramble about for clean clothes at dark o’clock on a Wednesday morning is the movitation here!

Washing up and wiping down.

Every night after dinner, I wash the dishes and wipe down the counters. If I’m not well I might not dry up and I’ll put it away in the morning but again life works better if I dry up and put everything away.

In the bathroom, I always wipe down the shower screen and tiles after a shower, it takes about a minute and keeps everything clean. I have a microfibre cloth and wiper in the bathroom next to the bath for this reason.

Making a cup of tea or brushing your teeth is a calmer experience if I’m not looking at the washing up that isn’t done or the grimy shower screen.

I’ve written about this before, it makes the room look tidier and calmer if its made and less than five minutes.

Changing the bed and towels

This happens weekly because clean sheets and towels feel nice and make you feel better about everything.

That’s pretty much it for housework that I do without fail.

I do mostly get to the other stuff, watering the plants, mopping the floors, the recycling, emptying bins and taking rubbish out, cleaning the bathroom etc by following the rules below.

If you see it, sort it.  – See something that needs doing and know that it’ll take five minutes, do it. If it’ll take longer, put it on the top of your to do list for when you’re home next. This is the only way I ever manage to hoover (I loathe hoovering), I walk up the stairs realise it needs doing and go and get the hoover before I’ve taken my coat off, then I just do it. I have a small carpeted area in my flat and it takes 10 minutes. Same goes for recycling, it takes less than five minutes to run down the stairs and put it in the bin, so do it when you think of it!

If you’re not using it, put it away – as soon as I’ve finished with the hairdryer, scissors, paper, book, knitting etc I put it back where it lives. That way, it’s not a mess to tidy up later. This applies to clothes as well, put laundry away as soon as it’s dry, hang up coats and clothes (or put them in the laundry basket) as soon as you get in the door.

Have a space for things like keys and handbags – I have a place in the kitchen that my handbag lives, when I come into the house I put my keys in the lock in the door. That way I always know where they are.

Tidy as you go – this is the similar to rule 2, but for me is more applicable to the kitchen especially if I’m doing the weekend food prep. Make one thing, wash up, start the next thing don’t create a kitchen bomb, it’s harder to work out what you need if all your equipment is in the sink (or dishwasher).

And there you have it, what’s working for me right now. There’s no magic system to keeping my house tidy because there’s no system that will work unless I do. 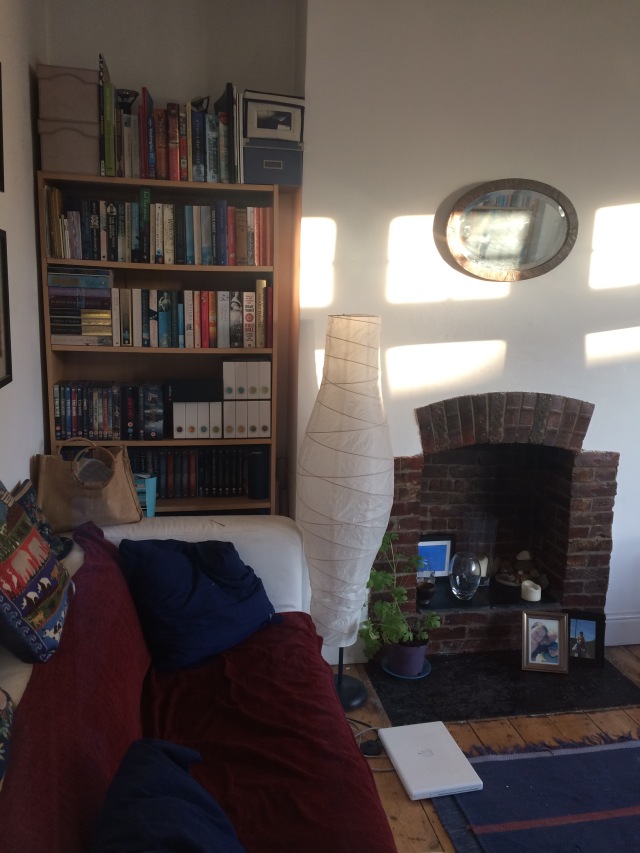 Erm...
View all posts by nicdempsey →
This entry was posted in Home, Housework, How To. Bookmark the permalink.