I’m a creature of habit when it comes to food and I’ll often eat the same thing week in, week out. Partly that’s me, if I like something, I like it a lot and I’ll keep eating and putting it in the menu rotation until I go off it and then I stop eating it for a while. Partly it’s because food that is easy to make, good to eat and affordable are like unicorns, very rare, so if I find something to eat that hits all of the above three criteria, then I use it a lot and it get bonus points if I can use it for lunch the next day!

Which is why this recipe from Back to Her Roots has been getting a lot of use in my kitchen recently. As it goes, I’ve never quite made it according to instructions. I used different herbs and red onion because I have very little time for white onions (unless it’s onion soup – seriously pink onion soup would be so very, very wrong) and I added a couple of blocks of frozen whole leaf spinach because I am all about extra vegetables.

But I don’t have a herb garden, I have a pot of rosemary that survives my neglect but no garden and there are about 100 people in front of me on the allotment waiting list and fresh herbs are expensive. So I started to play about with it and this was born.

I like any meal that you could make without having to buy food that you wouldn’t normally have in the house and I generally have everything I need for this at home. I would imagine that it would work perfectly well with tinned tomatoes too although you’d need to reduce the amount of water to cook the farro. 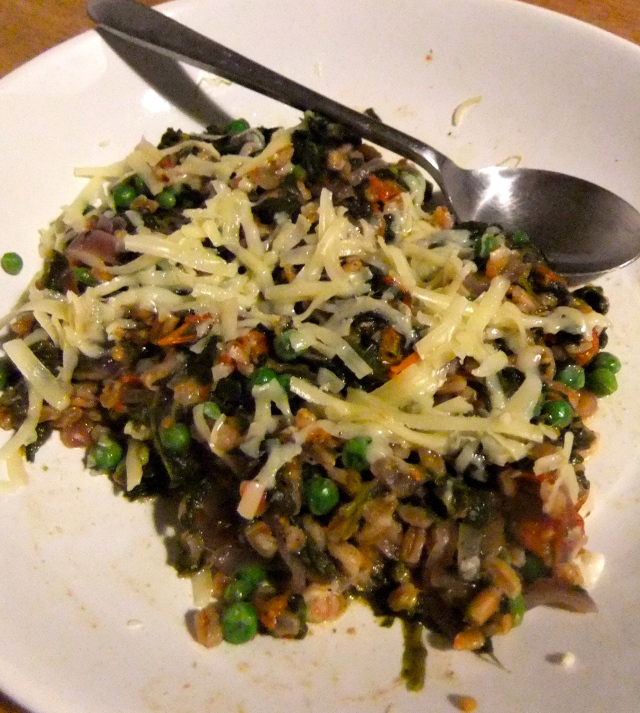 Please excuse the very bad photo that I took halfway through dinner last night, I’m going to add decent food photography to the list of things that I’m not very good at and/or add this meal to my list of ugly dinners!

Farro, tomatoes, spinach and peas (adapted from Back to Her Roots)

1 packet baby plum tomatoes (250g), halved or quartered depending on how much of a baby you are about large chunks of tomatoes.

1) Put everything except the peas and parmesan in a pot and bring to the boil.

2) Lower the heat, cover and simmer for about 25 minutes, until most of the liquid has absorbed

3) Add peas and parmesan, give it all a stir and cover for another five minutes or so until the peas are cooked through and the parmesan has melted in.

4) Serve. Eat. (I added more cheese at this stage because I could but that is entirely optional!)