Last Friday night, there was actual rain, but it didn’t really seem to make a lot of difference to the plot, which still  needed watering on Saturday morning.

The plot is doing well right now, the tomato plants all have fruit or flowers on and the tally for courgettes from Sunday to Saturday, was 12. That’s what they do, they make you think that they are never going to produce at all and just when you given up hope……blam, courgettes everywhere.

The crookneck is about to start the same thing, we had one last week but there are so many other fruits on it, it’s only a matter of time. We also had two cucumbers, which makes me happy.

Other than harvest, water and feed which takes forever, we did other things. We pulled up the sweet peas, they had aphids on them, and the California poppies that were taking over the rhubarb and also beginning to look a bit messy and thus were offending Ma’s sensibilities… 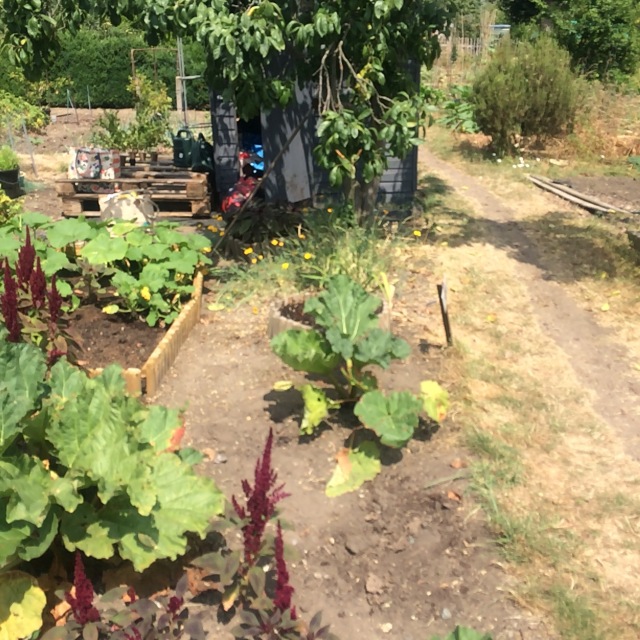 it also clears the space for feeding the rhubarb later in the year, we also have plans to wood chip up here to make it easier to weed and help the soft fruit.

I potted up the 21 kale plants that arrived on Thursday and have already given four away but that still leaves 17 plants to find room or homes for.

We started a new bed where the strawberries were. The ground was rock hard so they may require some hammering in when it’s a bit wetter. It was half filled with the compost from the potato bags. I’ll fill up some more next week and then some of the kale is going there, the rest of it is going to replace the French beans when they are done and maybe in pots until much later in the year when some of the other beds are finished.

I also planted out some more mint in the bath and trimmed the tomatoes some more, tomatoes are a labour intensive crop but they do reward the effort.

The three sisters bed is going nuts but if we do it again, it will need to be in one of the bigger beds. In my typical worry wart fashion, I’m worried that the corn isn’t doing as well and I have no tassles, but having done a quick calculation in my head, I’m going to worry about that after August. Corn needs 80 to 95 days and I planted this on 19 May. So I have some time to go..