I’m grew up with a more than usually in depth knowledge of the Peninsula Wars and the Battle of Waterloo. Why? Many reasons.

First. My mother was fairly keen so it was encouraged.

Second. Georgette Heyer, she wrote so vividly about it (with the kind of research that wouldn’t occur to most writers of light fiction – yes that’s what it used to be called!) I wanted to find out more. I know that fiction isn’t real life but I can’t be the only person on the planet that finds that historical fiction leads to reading around the non fiction books on the period!

Third. It was the first war that was documented by soldiers of all ranks, being able to read the accounts of soldiers of different ranks makes it more interesting.

Four. These wars changed so much about Europe and the world. It had a profound influence on how standing armies were shaped, many of the soldiers involved in those campaigns ended up involved in army reform and were (for good but mostly ill) involved in the spread of the British Empire. It’s not just the UK either, the post Waterloo settlement had a profound impact on the shape of Europe and how they went about expansion into Africa and the rest of the world. European law is largely based on the Napoleonic code. It’s important to know how times like this can and do shape the future, in the hope we can avoid causing the destruction that they did.

Today is the anniversary of the Battle of Waterloo and I also found out this week that  Apsley House are having a series of weekends to commemorate it. Guess where I’m going today.. 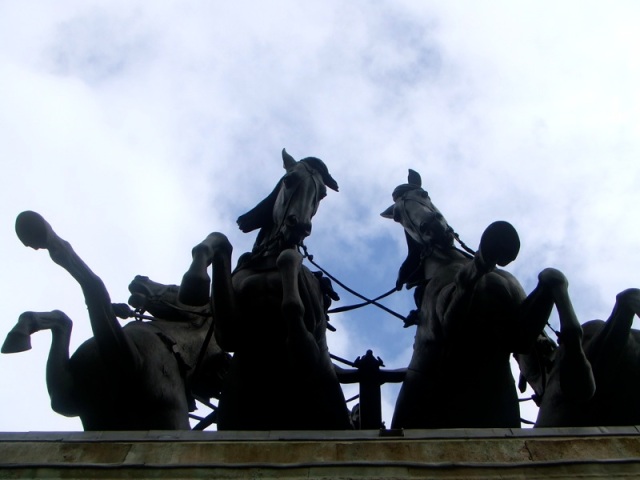 Below are some books that about that period both fiction and non fiction that sparked my interest.

The book that started the passion. Great detail, Heyer did a tremendous amount of research, lots of the things in the book that you think she made up happened and vice versa. Bear in mind though that it’s written around a soppy love story, if you’re not keen on those try the Sharpe books by Bernard Cromwell or…

Based on the experience of people who were there and is brilliant.

More soppy romance but this is based on a true story. Harry Smith met and married Juana after the storming of Badajoz. The book skims over her age (she was 14 at the time) but she really did follow him through the campaigns and later to India and Africa (Ladysmith in South Africa is named after her.) I have Harry Smith’s autobiography but it’s not for the faint hearted. However, now you should be ready for non-fiction. So…

This follows the 95th Rifles through the Peninsula Wars and into France. Gives a great overview of the battles and the war but manages to show the men and how they lived and not just the heroes but all of them including the deserters. It digs into how the formation of the Light Brigades and the way Wellington used them changed the shape of the army in the UK and also how Wellington had an impact because so many of the officers that fought under him in these campaigns went onto command and shape the army.

This is the first biography of Wellington I read. Chosen because I liked the book Christopher Hibbert wrote about the Battle at Waterloo..

Because he was there and he’s funny and sad at the same time. Having arrived in Portugal after the Battle of Bussaco, during Wellington’s retreat to Lisbon (as the British withdrew, they were basically stripping the countryside of all food and supplies) Kincaid who had left his greatcoat with the heavy baggage describes his situation, “My only covering every night was the canopy of heaven, from whence the dews descended so refreshingly”.

To War with Wellington: From the Peninsula to Waterloo – Peter Snow

I’m reading this now. Snow is enthusiastic and knowledgeable. He manages to give you the facts and the story of the people fighting.