How are we into November already? This is the month I got real about the TBR list on the Kindle and started to get rid of stuff, I just wasn’t going to ever read. I’m at 37 now but the actual physical books list is higher, I think because they are not books I can read in a couple of days and aren’t as portable as the Kindle, I’m being commitment phobic about them!  Anyway here’s what I read in October. 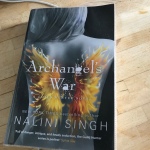 The Duke Who Ravished Me – Diana Quincy

I came out of the house without my book and this was on the Kindle app on the phone. It was fine. I had to open it just now to remind myself what it was about and it was fluffy with a suprisingly melodramatic plot. I could see it as a gothic novel. However, I liked that everyone got a happy ending.

I read this in one gulp. It has all of the things that annoy me about her writing, but aside from the repetition of how feisty Elena was and how Raphel would destroy everything should she be harmed etc. I enjoyed it. It seems to me that this it either the last book in the series or much like the pys/changling series, she’ll be onto a second arc. I love the world building, I wish she would show more than tell me about the feelings of the characters

The Silence of the Girls – Pat Barker

If you read one book on this list. Let it be this one. It was just plain good. I also find telling that it resonates with women but not so much with men. Briseis notes in the book that she begins to think of herself as a thing, not a person but because she is a person, she has feelings and she has to find a way to accommodate the huge rift that occurs when you lose everything and yet have to find a way to live with the people that hurt you. I want to go and read it again.

I love Jodi Taylor’s books and this is the start of a new series, a diversion from St Mary’s and about the Time Police. I really enjoyed it and it was just what I needed after Pat Barker. It’s three main characters (Team Weird) have nothing in common and don’t help one another but Taylor is brilliant at showing development, showing characters changing and becoming a team, as well as showing how easy it is to lose that bond to. And it’s hilarious and we get to go to St Mary’s and the next one is an autobuy! 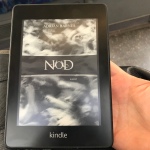 On The Come Up – Angie Thomas

I also really liked this, enough that I stayed in a bath for 2 and half hours to finish it! I enjoyed how real Bri is, it doesn’t at all stray away from how difficult it can be to be black and poor, but it’s about finding a way to survive AND be ok with yourself.

As part of my commitment to getting my kindle TBR down (this one has been sitting on it for 4 years!). I’m not sure what I’m expecting but this wasn’t it. Which isn’t to say, I didn’t enjoy it, the voice was so strong and so hopeful, although it’s not actually very hopeful. It’s about how we find ways to be human when we live with inhumanity. I liked it.

Another Kindle TBR, which I’m still not sure about. It is such a dark book, most people stop sleeping, we need to sleep society breaks down and we see it happen but the book ends in the middle, we don’t know what happens because the narrator goes to sleep.

Ok, I did enjoy these books but both books had British characters, in them, not only British but the heir and ex wife to the heir of a Baroncy, so as with other British characters, Knox has written, the language is slightly off for me. I’m pretty certain that if you are a Baroness (that wasn’t politically appointed to the House of Lords), then your granddaughter is not going to call you ‘nan’, she might call you Grandmother, Grannie or Grandma or some bizarre family version of it but not ‘Nan’. There were other instances. However, they were interesting books, although in the second, if at 19, I had behaved like that towards my mother, well the sound of the shouting as Ma ‘explained why I was being completely unreasonable’ would have been loud and gone on for a long time.