During the week, I mostly eat vegetarian food. As I’ve said before, it’s partly budget and it’s partly my choice of trying to buy locally, which means I use the butchers rather than the supermarket, which means that the meat I do eat, is more expensive. 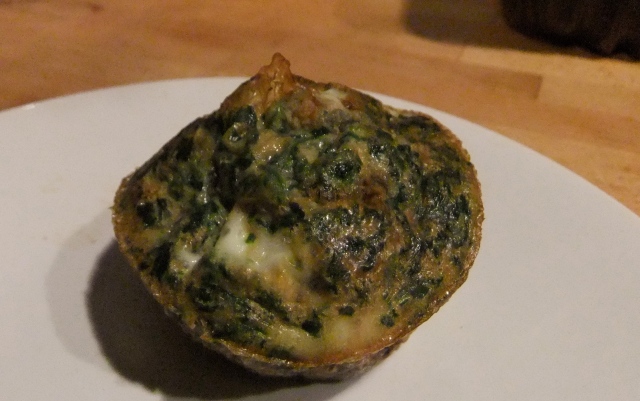 This change of diet has increased the amount of beans and eggs in my diet. I’ve been trying to avoid substituting cheese for meat as I eat quite enough cheese as it is! I love eggs and eat loads of them, in the morning, they can be poached, scrambled with lentils, and most often, for a weekday breakfast eaten hard boiled or like as eggcups like this although minus the goats cheese. Which means they have meat and processed meat at that.  I think it’s a good idea to keep my diet as unprocessed as possible, so I wanted something that worked as well for quick and easy breakfasts. While I was at it, if I could up the vegetable content, so much the better and this is what I came up with. My idea was a sort of mini frittata and the vegetables that came to mind were mushrooms and spinach.

I always have mushrooms in my fridge, I mostly eat them raw, either in salads or just by themselves and I always have frozen spinach around as it is really great to add to soups and stews. I also added half of a leftover courgette that was in the fridge but I think that this would work with any sautéed veg you had lying around. I made 10, enough for breakfast every day this week and used 10 eggs, but if you wanted to use some egg whites in place of some of the whole eggs I’m sure that would work too.

2. Heat a tablespoon of olive oil in a pan and sauté the courgette and mushrooms until the liquid is cooked off and they are browned.

3. Divide the cooked mushrooms and courgettes between the 10 muffin cups.

2. Using a muslin cloth, squeeze as much liquid from the defrosted spinach as you can.

3. Put the spinach in a bowl and break the eggs into the same bowl.

4. Beat the eats and spinach together until they are well combined and the spinach is broken up.

5. Pour the egg and spinach mixture into the muffin cups and bake for 20 to 25 minutes, until cooked through (my oven runs hot so don’t worry if it takes a bit longer!)

2 Responses to Spinach and Mushroom Eggcups