It’s not been a brilliant couple of months for getting the TBR lists down because the library re-opened and although it’s not as big as it used to be, it’s still the library! 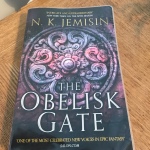 The Blade Itself: The First Law Book One – Joe Abercrombie

This was on the Kindle TBR and I enjoyed it but then it kind of stopped. I know it’s part of a trilogy but it set everything up and then stopped, I still have very little idea where it is going, I did try to see if I could get the second book at the library but I’m not sure I want to spent another £14 finding out what happens!

Sarina Bowen, I liked it, the story has been hinted at in the other Brooklyn Bruisers books and it made me happy to be in a world that I know nothing about. I did like that the heroine although was having issues with her career, she was the one with the money and that although she’s loved up and working on her issues she still has them!

Hurrah for a 40 something couple, who have been through the mill. I liked that even though the hero could be bitter, he wasn’t nasty about his ex wife and that his relationship with his daughter was such that she could see where he hurt and adjust, even though Dad wasn’t saying anything. While I understood the heroine, it took me longer to warm to her but I did love the competence porn. She was good at her job and respected for it, even if she was distant from the staff. Overall, it was lovely and once they had overcome their issues a HEA ensued…

The Ingredients of Us – Jennifer Gold

This was a free Kindle book of the month and I’m glad it was free because I didn’t like it at all. I didn’t like the structure of the story, generally jumping back and forward has to have a point and honesty I couldn’t see it. I also didn’t like anyone in the book, so I didn’t care… 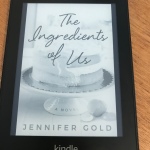 Say No to the Duke – Eloisa James

Another Eloisa James, I love the way James’ books always end with lots of children but I also really love that this book has an aunt who is amazing! Because spinster aunts are amazing and one day my nephews will get it!! The only tiny problem I have with this book is the PTSD, did soldiers get in in the Revolutionary War, probably, but I’m not sure that the emotions and feelings about it she ascribes to the upper classes are of the time but it’s a romance not a history book and I did enjoy it.

This was a Kindle free book that’s been sitting in the TBR list for a while. It’s an interesting setting. Basically an alternate Britain where a magic class of people are the aristocracy that deposed Charles I and set up a state where they are the only ones with power and very ungifted person has to do 10 years as a slave. And that is how the world and the economy runs and it’s as horrific as you’d expect. I enjoyed it enough to buy the rest of the trilogy and will probably get around to them next month.

War of the Wolf – Bernard Cornwall

So I was in the library picking up a book I had on hold and there this was in the recently arrived books. I love this series, with the improbably aged Uhtred and you can see how much and how little the world is changing and how the idea of an England is taking shape. Uhtred is going to be the oldest man alive in England by the time the books are done!

This was also on the display shelf in the library, I love Holly Black and I loved this. How do you hold on to yourself in a world where nothing is human and how do you survive? Can you without losing something vital? I really like that Jude decides to win power, not love. I have the second book on hold already..

This was the book I had on hold, I loved it. I liked the idea but also the way the story is told. It’s not until you read something that isn’t automatically based in white, western culture that you realise that not everything has to be. I really enjoyed this and have the last one on hold at the library!

Erm...
View all posts by nicdempsey →
This entry was posted in Books, Reading in 2019 and tagged Gilded Cage - Vic James, July 2019, june 2019, Say No to the Duke - Eloisa James, Superfan - Sarina Bowen, The Blade Itself: The First Law Book One - Joe Abercrombie, The Cruel Prince - Holly Black, The Ingredients of Us - Jennifer Gold, The Obelisk Gate - N.K. Jemisin, War of the Wolf - Bernard Cornwall, What I've Read, What I've Read - 2019. Bookmark the permalink.