It’s nearly the end of February and I still haven’t sown one seed! We did have an incredibly productive Saturday of work though. First we bought 500 litres of compost and wheel barrowed them to the plot. We filled up and covered several beds. Actually I say we, I did the two squash boxes at the end of the plot we both did the larger bed that will be the three sisters bed, and then Ma did the other four while I dug up the raspberries.

We re-sited some of them to one of the long beds at the bottom of the plot and the rest we left for anyone that wanted them. I think quite a few of them will go to the newly made communal fruit plot which will be used for the preserves stall for the open days!  We’ve decided that the 4 long beds are eventually, going to be fruit beds, with the other two being boysenberry (another plot holder has some going spare) and something else maybe a blackberry or some more gooseberries…we’ll see.

We’ve had a look at the space and we think we’ll get two of the bigger (2m by 1m) beds in and another meter square bed, which makes up for the beds we lose to perennial fruit. Over the last couple of years, we really worked that area with weeding and mulch and the ground is in great shape. I’m sure that the raspberries will try and come back but like everything else it’s a case of keeping on pulling them up! 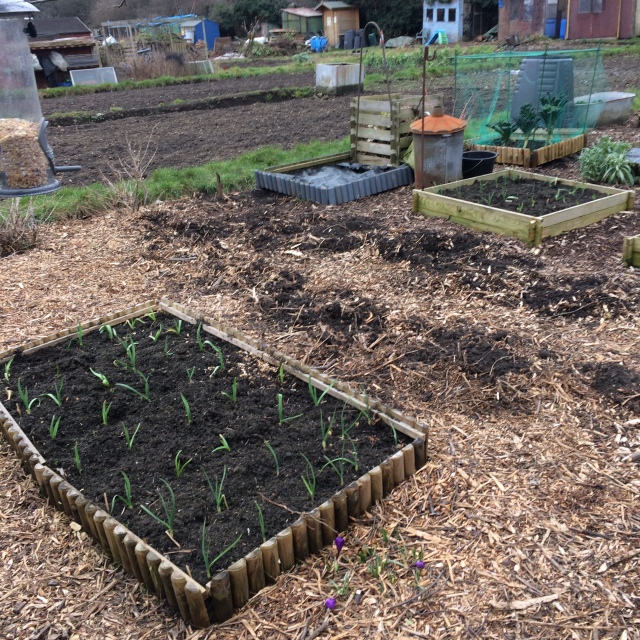 Next up on the work list, leveling the ground I just dug up, putting in and filling up beds, weeding and trimming the edges of the plot, painting the shed and putting up guttering and a water butt, tidying the shed before Ma loses her mind at the state of it, sowing some seeds and doing something useful with the pallets.