So I missed this last week and I’m getting hassle about being slack, so time for a plot catch up. This is easy to do because we didn’t go to the plot this weekend due to the weather. Saturday was windy and rainy and so we had a rest.

The week before though we were busy because there was lots of weeding to do. Not in the beds, which were fine but around the edges of the plot which was looking a bit messy 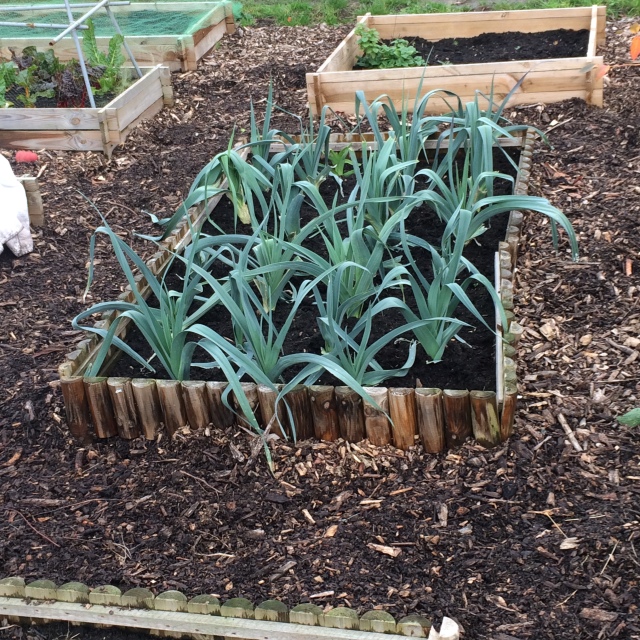 Then we discovered the pile of woodchip and I decided that we should put some more at the top of the plot. This is for several reasons, the soil up there has been exposed for a while and needs some love, it looks better and the warm autumn has meant that the bulbs and rhubarb think it’s spring and are putting their heads ups which won’t be good if there’s a frost. So after we weeded, we mulched.

I also decided that it was time to sort the ‘path’ by the shed. We have decided that we need to abandon the hillbilly patio because the pallets haven’t survived the weather that well so we’ll just use pavers and find something else to do with the pallets.

We also had winter inspection of the plots and passed. I still get nervous but I also know that do have a very tidy plot and even the bits that need work are in pretty tidy in comparison to other plots despite my rogue self seeding coriander.

We are at the part of the year where not much is happening and we start to plan. Ma and I did talk about the problem of the raspberries. They take up so much space and really mess with moving around the plot. Joe plants in rows and that doesn’t really work if you have repurposed the plot for raised beds. They also feature the last of the pipes on the plot which are rusty and really need to come up.

So I’m sort of thinking that we dig them all up and make two bigger beds for other things, we would then replant some of them in one of the long beds at the bottom of the plot and use one of the other long beds for autumn raspberries. I’m going to look at moving some of them over the next couple of months doing the digging up and making new beds later in the  summer, it really depends on the kind of winter and spring we have…

On the slate for next week is buying more compost and finish closing all the fallow beds…but if the weather is foul, all bets are off.