Last Tuesday I noticed that the use by date on the milk was that day. So I made cinnamon roll dough from here. I like this dough, it’s easy to work with, quick doesn’t have 100 ingredients. It’s also really versatile, I’ve stuffed it with jam, with fruit, with chocolate chips and it’s never complained. It’s also really easy to half the recipe, which is handy as it makes a lot! (It’s also worth pointing out that a quart is four cups, I didn’t know this and once I did life was so much easier!)

However, on Tuesday night, I left work later than usual and got stuck on a train due to either a passenger taken ill or a passenger under a train further up the line. Basically it was late when I got home and my timings were all wrong. I made the dough but not the rolls. The dough spent Tuesday night and all day Wednesday trying to engulf the contents of my fridge…like the blob…

Last year, when I gave people food baskets for Christmas, I was asked if there where any of those cinnamon and marmalade rolls? There weren’t. There will be this year and the great thing about these is that that that freeze brilliantly both before and after baking. So I get a headstart of preparing for Christmas!

I’m not going to give exact quantities here, I use more cinnamon and less butter and sugar than original recipe and and have used orange, lemon and lime marmalades in the rolls.

Although they are great if you bake them all crammed together in one baking tray, I most often do them in muffin pans. That way I’m less tempted to eat a whole tray of them! It also makes them easier to give away without buying disposable baking trays or losing your own baking trays! I don’t make the icing as the instructions in the recipe, I just make up one using icing sugar and apple juice.

1 quantity of this dough

Roll out half of the dough until it’s about 30 x 10 inches, add the sugar, butter and cinnamon (or marmalade or whatever you think will work!).

Roll them up and put into pans.

Leave them for roughly an hour to rise and bake in a medium oven for about 10 to 15 minutes. (Sorry I can’t be more precise, my oven runs hot and I rarely check the oven temp anymore!) 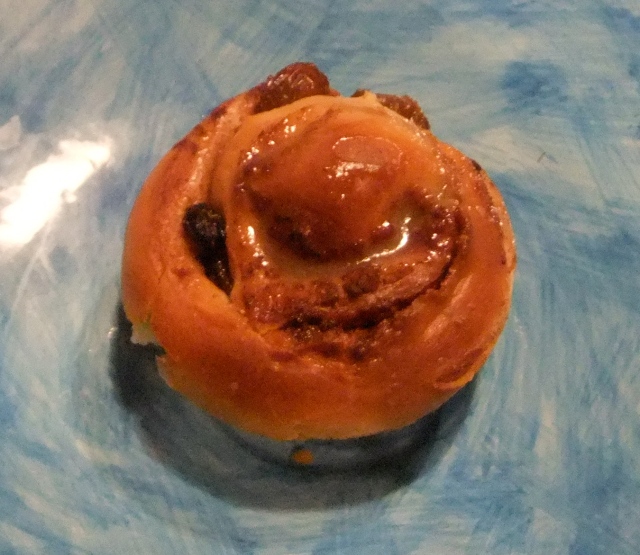