This week we got the plot. You can tell that people are beginning to think about Spring because there are more people on site, it’s also because the committee did unofficial site inspections before Christmas and spoke to the plot holders who might be in the weeds (literally) come spring. That and new tenancies starting in October mean that there are more people on site, working away.

Including us. We started off with re-filling the bird feeders. We have four feeders now, two for fat balls and two for seeds. Then we got around to cutting the blue pipe we have variously inherited and been given. We now have three sets for the square beds and two sets for the longer beds. So that done and put away, we went to our jobs.

There was more wood chip this weekend so I took the opportunity to cover the new gooseberry bed with it (I do this with all my fruit and it really seems to help them) and re-up the path that runs from the shed down the plot because it was looking a bit boggy. 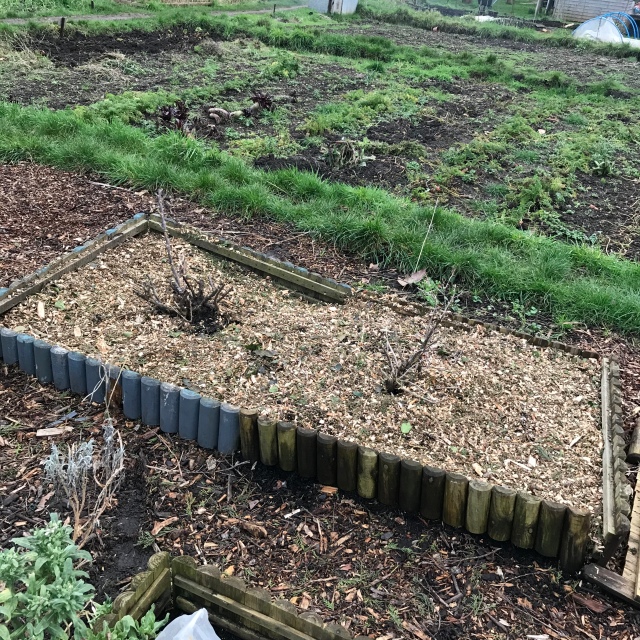 Ma got on with the epic task of weeding the new bed that we put together the week before last. I had given it a rough dig then and it’s full of grass and really weedy, that end of the plot is overshadowed by a building on the other side of the road and the soil is clay and holds water more than the other end, with all the rain we’ve been having, the soil is difficult to work so weeding was a tough job. However, experience has taught us (with all due respect to Charles Dowding) that weeding before we cover with compost works better than a layer of cardboard. While we were weeding the robins came to visit to see if there were any worms…

Back in October, I bunged a load of bulbs in a patch near the herbs, there were four types and I only remember two of them, giant snowdrops and bearded irises. We’ve pretty much just left it but I wanted to use the bricks we found on the plot to define the bed and we’ll add primroses and primulas and hellebores to it as well as other things. So I did.

I’ve bunged the two of the lavender pots in the space for the minute and put the path around it in. We’ve had a re-think about this side of the plot. At the other side of the new path, there is already a rose bush and there are another six roses on the plot, the ones at the back on the other side of the work area are not doing great because they don’t get enough sun. Mike and Nina are also moving plot and have offered me some smaller rose bushes from there old plot to. So we are going to move all the roses and have a mini rose garden next to this flower bed and a mini pond. So all of that side of the plot will be flowers and not vegetable beds! This is my very not to scale plan of the top half of the plot.

I also trimmed the oregano of it’s old flower and started with the trimming of the rosemary because it’s out of hand. In other news, things are beginning to bud and the rhubarb is coming back, just in time because I used the last of my rhubarb this week!

We also ordered three new beds which should come next week so once they are up and the roses moved that will be a huge area of plot structure done. We’ll order four more square beds in April and then one more that we’ll make next to the squash bed. Then all we have to do is fill them with compost!

We’ve done quite a bit and I’m feeling good about it. Next week is installing the new beds and moving roses. That will involve some epic weeding. So if that’s all we get done, I’ll be happy with it but if I get time I’d like to split the autumn raspberries and move the boysenberry.

We have a lot to do in February so here’s another list: