Posted on November 6, 2012 by nicdempsey

Last Tuesday, I got an email from my penpal Jen, apologising for forgetting to post my parcel!

I was relieved as I thought I was going to have 3 months in a row that I didn’t get a parcel, which would have been very sad. Jen’s parcel arrived on Friday. I was impressed at how beautifully wrapped it was. 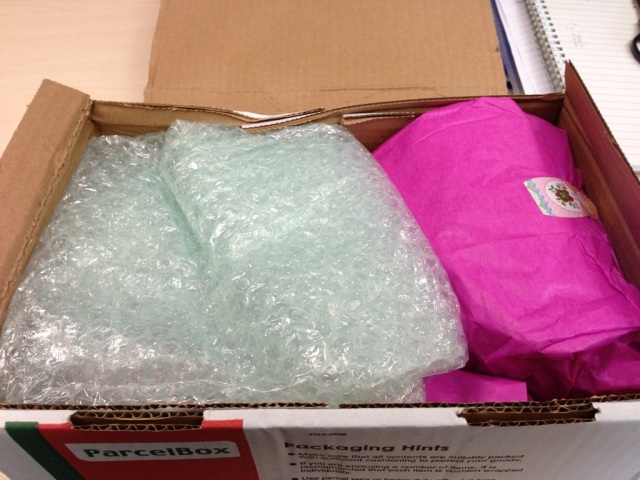 I was more impressed at it’s contents.

Darnley’s View Gin to be precise. I’ve heard about this gin but never tasted it. It’s a Scottish gin so I did wonder if the name had anything to do with Mary, Queen of Scots and Lord Darnley. I looked it up and the gin is made by the Wemyss Whisky Company in Fife. The blurb on the website reads thus:

Today, in recognition of this defining moment, they bring you the superbly balanced, hand crafted Darnley’s View Gin.”

I haven’t drunk it yet but I am going use it for this week’s Friday Night Cocktail, hurrah for gin.

Also in the parcel were a packet of chipotle chillis. Jen loves chipotle so I’m going to have to find something to use them in, hopefully they won’t be too hot. Last year Max and I made some spiced vodka using chillis and I’m thinking that these might add a nice smoky flavour.

Last but not least some handmade strawberry and vanilla jam. Perfect as I’ve never really successfully conquered strawberry jam so very rarely have any.

Jen also included a flyer from the shop that she bought my chillies in and a local food magazine and it’s a good job it’s for October because it made me want to jump on a train straight to Edinburgh!

A fantastic parcel – thanks Jen!

If you’re interested in joining the foodie penpals group, go to Rock Salt where Carol Anne explains it all and you can sign up.

Erm...
View all posts by nicdempsey →
This entry was posted in Food, foodie penpals and tagged Foodie Pen Pals, October. Bookmark the permalink.