Apparently it’s Christmas already, well it seems to have exploded over every shop in the high street. I am not a fan of this. I am a fan of Christmas, but I yearn for the days when it started on Christmas Eve and ended on 5th January. I try to not to put my tree up to the last minute (although that usually means the Saturday before Christmas) and frequently refuse to do anything about it until after my mother’s birthday on 4th December. Yep, Olly is November 22nd, Mum is December 4th and my father’s birthday was 15th December (he once told me that he was called Noel because his mother thought that this was as close to Christmas as she’d get, a couple of years later his sister was born on Christmas Day!!) Anyway I’m completely getting off the point…which is I don’t really plan for Christmas. However, this year I’m unemployed so Christmas is a scaled down affair where I plan to make most of the presents I’m giving. By making I mostly mean food, this isn’t a completely new idea, for the last couple of years, I’ve been giving out mince pies, cinnamon rolls, marmalade and various other foodstuffs.

This year I have a partner in crime, hello Max

Max and I met when we both worked for Ealing but over the last couple of months, she’s been on maternity leave and I’ve been unemployed so we’ve been seeing a lot of each other and we’re both skint! So today we’ve been making chilli jam and thinking about other things we could put in food parcels. 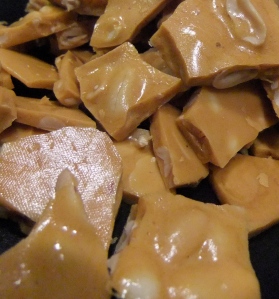 This isn’t my recipe, it’s Nigella Lawson‘s from Nigella Christmas.

150g golden syrup (if you’re not in a place where you can get this, light corn syrup is a good subsitute)

1 and a half teaspoons vanilla extract

1 and a quarter teaspoons bicarbonate of soda

1) Line a baking sheet with either a non stick baking mat or buttered foil and put near the cooker for use later on.

2) Put the sugar, water and syrup into a medium sized pan, bring to the boil gently and then turn up the heat and boil for 10 minutes. It’s going to be really, really hot so be careful.

3) Turn off the heat and using a wooden spoon, stir in the peanuts, followed by the vanilla, bicarb and butter. It will look gooey and be bubbling and very hot.

4) As quickly as you can, pour the mixture onto the baking tray and using the wooden spoon flatten out to a sheet. Remember it’s still really hot, don’t use your fingers to try and coax the mixture sticking to the spoon onto the baking sheet. It really hurts!

5) Leave to harden, then break into pieces and store in an airtight container or box. You can make this up to a week before you give it away, just store in airtight containers in a dry, non humid environment. One opened it should be eaten in 8-10 days, if it lasts that long, I’d be really surprised.